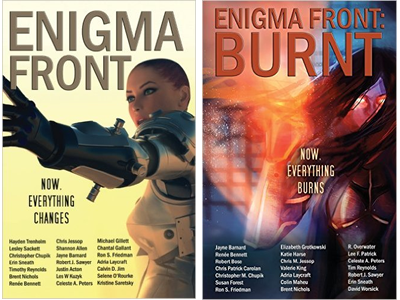 The annual short anthology of IFWA members published by Analemma Books has just closed its third call for submissions. This year’s theme, The Monster Within, celebrates and recognizes the upcoming 100 year anniversary of Mary Shelley’s Frankenstein. With over 45 stories submitted, the selection team has their work cut out for them as many talented authors contribute their stories with their personal style, genre, and interpretation of the theme.

The anthology will be published over the next several months and launched at the annual When Words Collide Reader Festival. The previous titles, Enigma Front and Enigma Front Burnt, can be found on Amazon or at local booksellers around Calgary and central Alberta. Be sure to check out the previously published talent before the new release!